The MUG Event Calendar for the Week of August 26: Jeff Gamet of Smile, Editing Commercials, and Bridging Digital and Traditional Media 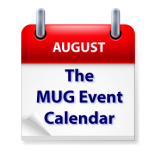 At the top of the last MUG Event Calendar for August is Smile’s Jeff Gamet’s visit to a Connecticut group. A California creative pro group will look at editing commercials, and an Ohio group will discuss bridging digital and traditional media.

Los Angeles Creative Pro Users Group – Television commercials have changed. No longer are they confined to 30 or 60 seconds. With TV subscriptions in decline, the traditional TV commercial has now gone online. And that has changed everything. We welcome editor Lauren Dellara from Angus Wall’s Rock Paper Scissors. Lauren has edited many commercials for such companies as Nike, North Face, Calvin Klein and more. Lauren will discuss what goes into creating an effective ad and show a few examples of her work. We also welcome editor Zoe Mougin who also works out of RPS. Zoe has edited commercials for companies such as Facebook, HP, Google Pixel 2, Honda, Adidas and many more.Also Paul Saccone returns to lacpug to show off the just announced Resolve 16.1 including the much maligned “Boring Detector.” Paul also promises to show off “things you might not know Resolve 16 can do.” Bring your questions.