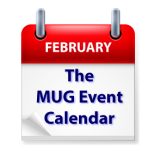 This week’s MUG Event Calendar finds MacVoices’ Chuck Joiner delivering a CES report to an Arizona group, cord cutting on the agendas of groups in New York and Virginia, iCloud discussions in Maine, and web browser examinations in Michigan.

Maine Macintosh Owners & Operators Society – “Hey, You, Get Into iCloud”

Naples MacFriends – Get Organized: Clean Up Your Digital Act