The MUG Event Calendar for the Week of June 25: 18 Years of LACPUG, Gaming, and WordPress 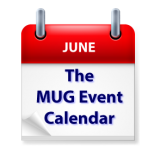 This week’s MUG Event Calendar features an 18th birthday by a California creative pro group, a discussion of gaming at an Australian group, and a review of the WordPress web publishing platform in Ohio.

We will celebrate with the official debut of Bradley Olsen’s OFF THE TRACKS, a documentary about Final Cut Pro X. Brad will be in attendance to introduce the film and for Q and A.