The MUG Event Calendar for the Week of March 29: Jeff Gamet, Astrophotography, iPad Files and Folders 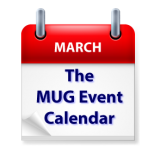 A visit by Jeff Gamet to a Connecticut group to talk Apple TV leads off this week’s MUG Event Calendar, followed by a presentation on astrophotography at a UK group, and a discussion of organizing files and folders on the iPad at a Florida group.