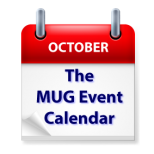 Visits by Shelly Brisbin to a Texas Group and Gary Rosenzweig to a Colorado group highlight this week’s MUG Event Calendar. Also a group in Florida will focus on lightning (not the connector, the weather phenomenon) and clouds (the backup kind, not the puffy white kind).

Ocala Macintosh User Group – Lightning and Your Electronics; Why We Need a Cloud Backup