The MUG Event Calendar for the Week of April 4: Paul Kim of Noodlesoft, Gary Rosenzweig, Notes 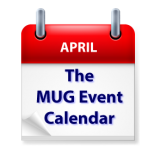 The April MUG Event Calendar kicks off with appearances by Paul Kim of Noodlesoft at a New York group and Gary Rosenzweig at a Texas group. A Washington D.C. group will focus on Apple’s Notes, and an Illinois group will benefit from a presentation by a professional photographer.