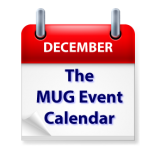 Jean MacDonald of App Camp for Girls will speak to an Oregon group about their projects, and Yosemite will be the featured topic at a California group. After that, groups from England to Michigan, Florida to Nevada will be hosting holiday celebrations.

Want to see your meeting details on The MUG Event Center? Put a note on your calendar for the first of the month and email the details of your next meeting to The MUG Center. Simple!

Club Mac of Monterey – No Meeting