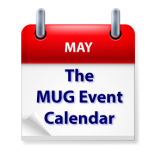 This week’s MUG Event Calendar is the busiest we have seen in many, many months.

Adam Engst of TidBITS and Chuck Joiner of MacVoices will discuss the M1 Macs and iPad at a Virginia group while, on the same night, Dave Hamilton of The Mac Observer will cover Plex with a New Jersey group. Kelly Guimont, also of The Mac Observer, will cover Apple device spring cleaning with one Texas group, social media expert Kerry Rego will talk about social media with a Florida group, and Dwight Silverman of Fortune Magazine will be the featured speaker at another Texas group.

The Villages Apple User Group – An Overview of Big Sur

Atlantic City Area Macintosh Users Group – VPNs – What, Why and How