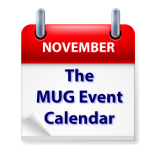 Jeff Gamet will talk to a Colorado group and Adam Engst and Chuck Joiner will team up for a conversation at a New York group. Gary Rosenzweig is going to be busy with three appearances: one in New Jersey, one in Pennsylvania, and one in Michigan.

Other topics on this week’s agenda include Apple watch, Internet scurity, photo editiong and more.